Congratulations to Carole Mertz, winner of last week’s Friday Freebie contest: Brave Deeds by David Abrams. Thanks to everyone who participated in the blog’s 10th Anniversary celebration!

This week’s contest is for The Mountains Sing by Nguyễn Phan Quế Mai. You may remember hearing about this debut novel earlier at the blog; now I’m offering one lucky reader a chance to win a new hardback of the book The New York Times calls “[An] absorbing, stirring novel . . . that, in more than one sense, remedies history.” Keep scrolling for more information on The Mountains Sing and how to enter the contest... 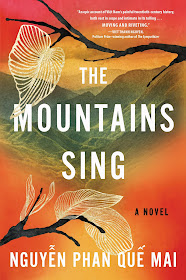 With the epic sweep of Min Jin Lee’s Pachinko or Yaa Gyasi’s Homegoing and the lyrical beauty of Vaddey Ratner’s In the Shadow of the Banyan, The Mountains Sing tells an enveloping, multigenerational tale of the Trần family, set against the backdrop of the Việt Nam War. Trần Diệu Lan, who was born in 1920, was forced to flee her family farm with her six children during the Land Reform as the Communist government rose in the North. Years later in Hà Nội, her young granddaughter, Hương, comes of age as her parents and uncles head off down the Hồ Chí Minh Trail to fight in a conflict that tore not just her beloved country, but her family apart. Vivid, gripping, and steeped in the language and traditions of Việt Nam, The Mountains Sing brings to life the human costs of this conflict from the point of view of the Vietnamese people themselves, while showing us the true power of kindness and hope. The Mountains Sing is celebrated Vietnamese poet Nguyễn Phan Quế Mai’s first novel in English.

If you’d like a chance at winning The Mountains Sing, simply e-mail your name and mailing address to

Put FRIDAY FREEBIE in the e-mail subject line. Please include your mailing address in the body of the e-mail.

The Fine Print
One entry per person, please (or, two if you share the post—see below). Despite its name, the Friday Freebie remains open to entries until midnight on June 11, at which time I’ll draw the winning names. I’ll announce the lucky reader on June 12.

The Finer Print
If you’d like to join the mailing list for the once-a-week newsletter, simply add the words “Sign me up for the newsletter” in the body of your email. Your e-mail address and other personal information will never be sold or given to a third party (except in those instances where the publisher requires a mailing address for sending Friday Freebie winners copies of the book).

The Finest Print
Want to double your odds of winning? Get an extra entry in the contest by posting a link to this webpage on your blog, your Facebook wall or by tweeting it on Twitter. Once you’ve done any of those things, send me an additional e-mail saying “I’ve shared” and I’ll put your name in the hat twice.