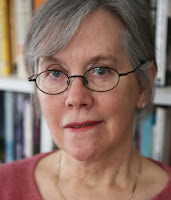 Reader:  Jan English Leary
Location:  Chicago
Collection size:  About 1,300 books that are mine alone and about as many in the rest of the house that my husband and I share. That doesn’t count our several hundred ebooks.
The one book I’d run back into a burning building to rescue:  My most prized published books are my Best American Short Stories editions, but they’re too numerous and cumbersome to grab in a fire. Instead, I’d rescue the self-published book my grandfather compiled of the pages from my grandmother’s scrapbook over the years. And I would also grab the book my son James wrote, illustrated, and bound in second grade and dedicated to his brother. Pretty much everything else, I could replace.
Favorite books from childhood:  The Secret Garden, Handy Mandy in Oz, Mary Poppins, The Island of the Blue Dolphins, Cheaper by the Dozen, A Tree Grows in Brooklyn, and Rebecca.
Guilty pleasure book:  I don’t tend to read things that I’d consider guilty—I’m more of a guilty TV watcher—but I did enjoy the Poldark series by Winston Graham, which I came to know through a BBC TV series, so this is guilty pleasure by association. It’s a family saga that takes place in Cornwall, England in the 18th century. The novels continue well into the 19th century following the descendants of the original heroes. 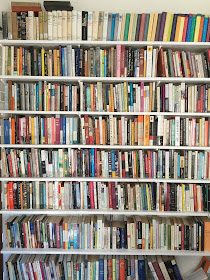 Like most writers, I’m a book accumulator. Not quite a hoarder because I often give away books to friends and donate them to used book sales, but my shelves still groan under the weight of the books I own. When piles start building on the floor, I know it’s time to cull.

When we moved into our current home ten years ago, I was eager to have shelves installed so I could rehouse my books, which had been in boxes for several months. After the kitchen, it was the next room where we unpacked the boxes. A couple of days after my husband drilled the holes and put up the shelves, he fell and tore his rotator cuff, requiring surgery. We put aside settling into the house as he worked to regain his strength. Although I was relieved that he was on the mend, a tiny, shameful voice looped in my head, asking, What if this had happened before the shelves were done? 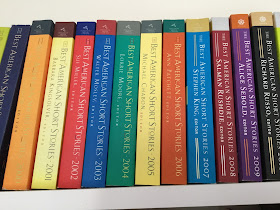 We have books all over the house, but my books are principally in two rooms: my office and the guest room. I have two walls of shelves in my office: my short-story wall and my work-in-progress wall. The short-story collections range from Sherwood Anderson to Stuart Dybek to Richard Yates, from Alice Adams to Alice Munro to Eudora Welty. It is carefully organized and maintained, the spines neatly in line. I have collected Best American Short Stories editions for the past thirty years that I’ve been writing fiction. When I’m lucky enough to find an older edition, I buy it to fill a hole in my collection. My earliest copy is from 1926. One of my sons has taken to carrying a list with him of the editions I lack, and he is on the lookout for copies to fill in the gaps. One year, he gave me the editions from my birth year and the year my parents were married. I also collect the O. Henry Prize Stories with the same goal of someday having a complete set. I am running out of room, but I can’t get rid of them. 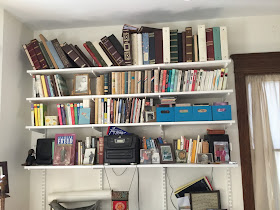 The working wall houses research books for my novel, Thicker Than Blood, which dealt with transracial adoption, maternity homes, and the Endicott-Johnson Shoe Company. I can’t seem to part with these books even though the novel is done and published. For my current novel-in-progress, I’m consulting books on homeschooling and Sensory Processing Disorder. Poetry, books on craft, literary magazines, and my personal writing journals, all share space with family photo albums. Framed photos perch on the edge of the shelves: me on the last day of my pregnancy with my younger son, my father in Paris during World War Two, my older son in kindergarten, my younger son riding a horse, my brother and me on a boat when we were children. These shelves also hold art postcards, a Sigmund Freud action figure, a Chinese brocade purse, a metal box of letters I wrote home to my parents during my year abroad in Paris, and a cardboard box of letters between my parents the year before they married. It’s a wall of memories as much as information.

In the guest room, I keep novels and non-fiction: classics from Austen to Dickens to Stendhal, graphic novels and cartoons from Alison Bechdel to Roz Chast to Chris Ware, essays and memoirs by Joan Didion, Nora Ephron, and David Sedaris. histories of Paris, biographies, and The Annotated Brothers Grimm, as well as my tattered copies of Astérix and Tintin. On the top shelf, out of reach except by stepstool, sit remnants from earlier periods of my life: my French dictionaries (Cassell’s, Larousse, et Robert), my Pléiade edition of Baudelaire, yellow Garnier editions of Balzac, Molière, and Racine, and my Russian texts from college. You’ll also find children’s books from three generations of our family: The Lost Princess of Oz, Treasure Island, Frog and Toad, Heart Specialist (a book my mother treasured in high school), Mike Mulligan and His Steam Shovel, James and the Giant Peach, and Little Bear.

My library reflects two sides of my nature, my desire for order and my tendency toward chaos.


Jan English Leary’s short fiction has appeared in Pleiades, The Literary Review, The Minnesota Review, Carve Magazine, Long Story, Short Literary Journal and other publications. She has received three Illinois Arts Council Awards and taught fiction writing at Francis W. Parker School and Northwestern University. Her first novel, Thicker Than Blood, was released by Fomite in 2015 and her short story collection, Skating on the Vertical, was released in 2017. She lives in Chicago. Click here to visit her website.

My Library is an intimate look at personal book collections.  Readers are encouraged to send high-resolution photos of their home libraries or bookshelves, along with a description of particular shelving challenges, quirks in sorting (alphabetically? by color?), number of books in the collection, and particular titles which are in the To-Be-Read pile.  Email thequiveringpen@gmail.com for more information.