Though we are all distinguished and separated from each other by many things—race, sex, religion, and the varied impulses of our personalities—in the end, we all share one thing in common: all of us, each and every one, will someday die. Try as we might (and oh, we try so hard), none of us can avoid our inevitable status as a corpse. To be particularly indelicate about it, we all wind up as nothing more than lifeless meat on a cold stainless-steel table in some morgue or embalming room at a funeral parlor. But what of our bodies’ final lifeless moments before the casket is sealed or the crematorium fire consumes us? Who will give us our final goodbye? In Susan Henderson’s new novel, The Flicker of Old Dreams, that last earthly shepherd for the residents of tiny Petroleum, Montana (population: 182) is Mary Crampton, the funeral director’s lonely daughter who spends a lot of her time embalming bodies before the funeral. Mary herself has never fit in with the rest of the folks in Petroleum: “It’s fair to say I’m not a people person,” she tells us. She is a corpse person, but not a people person. In a way, her own personality has been embalmed. Her true nature is preserved and hidden from those she grew up with. While her father tends to the needs of the grief-stricken in the upstairs parlor, Mary retreats to the silence of her work in the basement. 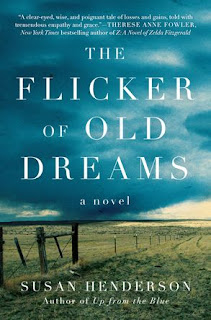 The trailer for the novel gives some indication of this stark isolation. As a video, it’s an artful short film (I like the way the Barbie doll metaphorically bridges the space between Mary’s childhood and her adult work); but as a trailer, it doesn’t fully capture the surprising warmth and poignancy of Henderson’s novel. It’s like David Lynch directed an episode of Six Feet Under. While I like Mr. Lynch’s work and have enjoyed the quirkiness of the HBO series, The Flicker of Old Dreams feels more potently human to me. In contrast to the nature of Mary’s work, it is alive with emotion and, while I’m only halfway through reading it, I can confidently say it is one of the best books I’ve read this year. Just look at how tenderly Henderson captures the quiet moments Mary spends with the newly-dead as she prepares to go about her work, slicing and stitching and stuffing:


The dead come to me vulnerable, sharing their stories and secrets. Here is my scar. Touch it. Here is the roll of fat I always hid under that big sweater, and now you see. This is the person I’ve kept private, afraid of what people would think. Here I am, all of me. Scarred, flabby, covered in bedsores. Please be kind....Perhaps everyone longs for this. Just to be and to have someone stay near....There is no pressure to be charming or clever. We are simply here, together in this quiet.

When we die, may we all have someone like Mary Crampton to be with us in our final quiet moments.


Trailer Park Tuesday is a showcase of new book trailers and, in a few cases, previews of book-related movies.